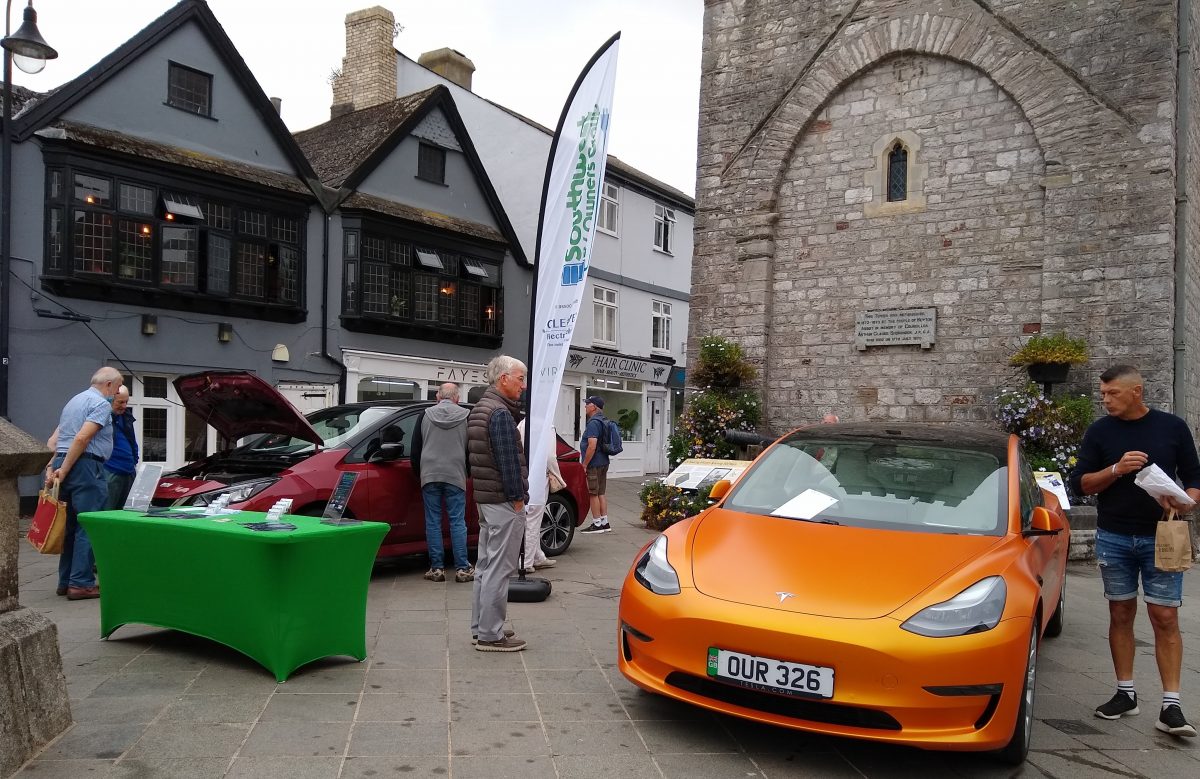 Newton Abbot’s first electric vehicle (EV) roadshow held on 25th September was well attended, with lots of people stopping to chat to members of the South West EV Owners Group and others who had brought their cars along.

The event, organised by Action on Climate in Teignbridge (ACT) and ChargeWorks, a local electric vehicle consultancy, lined up 11 EVs by the clocktower.

Some of the cars were almost new, others already up to six years old. Those on parade included Nissan Leafs, Tesla Models S and 3, a Renault Zoe, Hyundai Ioniq, Kia e-Niro, VW ID.3 and a VW e-Golf – just a small sample of the EVs available today.

One Tesla owner, John, had come from Bridport in Dorset for the day to share his enthusiasm for the joys of going electric. He bought his first Tesla in 2016 and recently switched to  a newer model. He decided to buy an electric vehicle to be greener, he says. He also has solar panels, runs a wood chip range for his central heating, and is investigating a solar thermal panel for hot water.

John’s Tesla (the burnt orange one in the picture) has a range of 300 miles, but he confesses on long journeys he has to stop every 150 miles for personal reasons, and the car only takes around 15 minutes to charge on a rapid charger anyway.

David, another Tesla owner from Plymouth, says his running costs are much lower than on his old diesel car – £250-£300 a year for his 12,000 mileage, down from £1,500. Another advantage is the lack of any scheduled maintenance. Electric vehicles still need servicing regularly, to replace windscreen wipers, change brake fluid, etc, but with no emissions test and fewer parts, repairs are minimal. “You can expect to do 300,000 miles without any problem,” says David.

His enthusiasm was infectious as he talked about the technicalities of charging and the price of new cars. He says EVs may appear expensive but hold their value better than petrol or diesel cars, and as they have more space inside you can consider a smaller model than you might otherwise have done.

Emma Fancett of ChargeWorks estimated around 800 people walked past the cars and stopped to chat throughout the day. “Some hadn’t previously talked with others about the electrification or decarbonisation of private transport,” says Emma. “Others had, but were keen to find out more and debunk some of the myths they had been harbouring.

“Some walked the length of the line up, chatting to each owner to quiz them on their experiences, tips and tales, some went straight for a car they were interested in to scope it out for a future purchase or lease. Others enjoyed more general conversations around carbon emissions, the fuel crises, technology or fast cars.”

Julian Stringer of ACT says: “The selection of available EV models is expanding all the time, so we are thinking of arranging another event in the future, and would be particularly interested to hear from owners of other types of EVs at the more affordable end of the range who would be interested in sharing their experiences.”

Cars weren’t the only vehicles on show – some electric bicycle owners were also around to spread the word about the joys of two wheel travel. Richard from Newton Abbot uses his Cube bike, with a powerful 500w motor, to commute to work in Ashburton. It has cut his journey time by 10 minutes compared to his regular bike and allows him to arrive at work cool, calm and collected instead of in a lather from pedalling hard.

Richard still goes out for leisure rides on his ordinary bike, and has persuaded his partner to accompany him on the electric one. She was so impressed with the ease of cycling on it they ended up in Moretonhampstead when they had planned on just going to Bovey Tracey on the cycle path.

Electric bikes are often an addition to the household collection of bikes rather than a replacement. Once you have made the switch to an electric car, though, it seems there is no going back. “You will smile every time you get in the car,” says Tesla owner David.