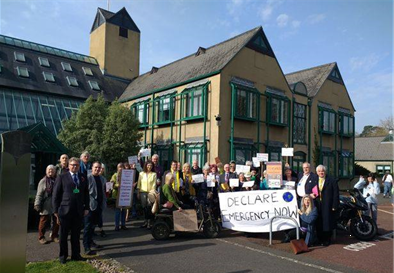 On April 18th 2019, Audrey Compton was standing outside Forde House, the home of Teignbridge District Council (TDC), with a group of people holding banners. They were there to lobby the council to pass the climate emergency declaration proposal put forward by Councillor Jackie Hook.

“We really didn’t think it would pass, but it did, unanimously, and with an amended carbon neutral target date of 2025, which was quite a surprise,” says Audrey, a Teign Valley farmer and environmental campaigner.

That target date was the most ambitious in the country, says Fuad Al-Tawil who was also at Forde House that day. “We thought it would be tough for the council to meet that target so suggested setting up a support group.”

The suggestion was welcomed, and Action on Climate in Teignbridge (ACT) was formed in the summer of 2019 following a public meeting in July at Coombeshead Academy in Newton Abbot attended by about 200 people.

Fuad says: “The idea was to support TDC to deliver on its climate emergency declaration and to work with community organisations in Teignbridge, including parish and town councils, as a bridge between them and TDC.”

A voluntary organisation working with a district council was a novel idea – unique even. Fast forward three years and how has that worked out? Well, the monthly meetings still happen and ACT has given freely of its expertise and opinions, which appear to be valued. It has at times offered a critical voice, and remains completely independent of the council. “We have built a good and pretty unusual relationship with the council,” says Fuad.

Kate Benham, ACT chairperson, says it has been a learning curve for both parties. “The council moves slowly, which can be frustrating, but it’s a case of understanding what it can and can’t do.”

Andrew Shadrake, a founding member of ACT, believes ACT has kept the pressure on the council: “Things have happened that wouldn’t have happened without us. We offer a resource, particularly on technical knowledge, that TDC relies on.”

However, the reality remains that carbon emissions have barely budged. Says Fuad: “ACT has  succeeded in doing what we set out to do, in terms of supporting the district council and engaging the community. But in delivering on what matters, carbon reduction, we haven’t succeeded.”

Action on nature and carbon

ACT has had success on the ecological front, in particular with its Wildlife Wardens scheme, launched in the autumn of 2020. There are now 100 volunteer wardens spread across Teignbridge who have received training and do what they can to help wildlife in their parish.

“It’s been twice as successful as I ever hoped,” says Audrey, who set up the scheme and runs it with Flavio Winkler-Ford, a part-time paid coordinator.

“The great thing is wardens follow their own interests rather than ACT telling them what to do,” she adds.

Spurred by the success of wildlife wardens, in early 2022 ACT launched the Carbon Cutters initiative in a renewed effort to move the dial on carbon emissions. Trying to achieve this through engaging with local councils has proved tough. ACT will continue to work with councils, but will concentrate on engaging with community groups for the Carbon Cutters scheme.

“We are working with around 13 groups so far,” says Kate. “They are hugely enthusiastic and really want to help.” The scheme is run by part-time paid coordinator Peta Howell, with the help of a group of ACT members.

Three years since launch, ACT still has a core group of enthusiastic, ambitious and committed people, and a wider membership of close to 450. That’s an achievement in itself, says Andrew.

Moreover, with Wildlife Wardens, and now Carbon Cutters, “we have tested and succeeded in developing a model for people to take action. We have also demonstrated a way of moving a district along, and raised the profile of climate change in the community.”

Flexibility is a key strength. “We are an evolving organisation that is learning all the time,” says Kate. “It’s good that we’re not afraid to change direction if we need to and try new things.” Mandy Cole, a psychologist who volunteers with ACT says it’s also important that “we don’t tell people what to do. We listen and learn more about what would help them to do more about climate change.”

There is also the personal reward for ACT members that comes with taking positive action, working with like-minded people and just having fun. For Audrey, “the last three years with ACT have been the most productive of 20 years of campaigning on climate change”.