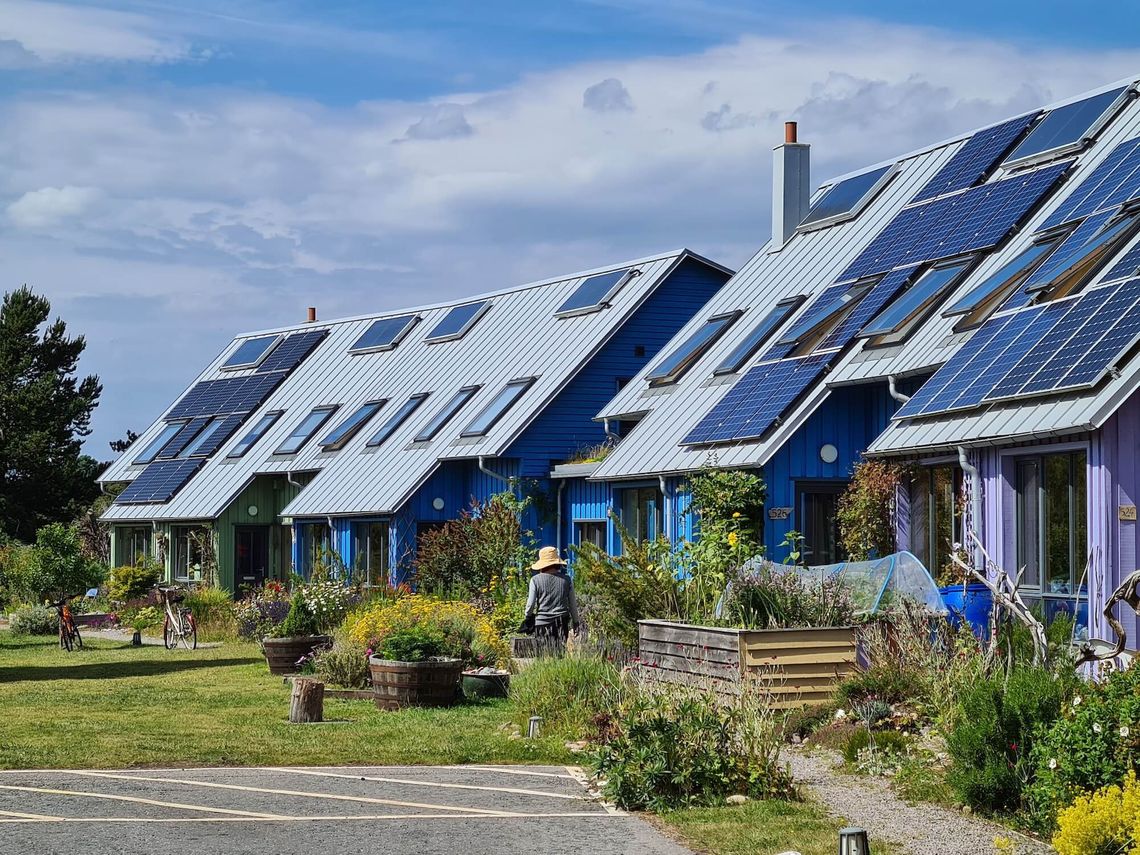 The IPCC report tells us we are on a suicidal path. Change or kiss stability goodbye.

There is a wealth of analysis and opinion on this report in the press and professional journals but CarbonBrief’s comprehensive detailed question and answer paper covers the main aspects.

Much more has still to be written but here is a summary highlighting some key areas of interest.

On 4 April the IPCC released its third report, by Working Group lll (WG3), from its 6th Assessment Report, with an updated global assessment of climate change mitigation progress, explaining developments in emission reduction and mitigation efforts and assessing the impact of national climate pledges in relation to long-term emissions goals.

As is always the case, the main report from the scientists, of about 3,000 pages, was then summarised with every line of the summary discussed, and where necessary amended or removed, in order to gain the approval of 195 countries. The result is the 64 page  “Summary For Policymakers” (SPM).

At two weeks, the discussions over the SPM were the longest of any such report with key text such as “vested interests”, “lobbying”, “degrowth”, “media” and even “economic growth” all appearing multiple times in the main report but missing in the SPM, reflecting the influence in the review process of vested interests determined to avoid publishing issues that reflect badly on their activities.

It’s worth noting that, as a result of the pandemic, CO2 emissions dropped by about 6% in 2020 but they have since bounced back meaning that, effectively, from the start of 2022 the report says we have to match 2020’s reduction in each of the remaining eight years of the decade.

One aspect of the report that has been widely misreported in the press is the point at which emissions must peak, covered in the report as:

Global greenhouse gases are projected to peak between 2020 and at the latest by 2025, in global modelled pathways that limit warming to 1.5C

This was taken to mean that we can continue to increase emissions for another  three years whereas, in reality, emissions should have peaked closer to 2020. It is explained here.

What the new IPCC report says about how to limit warming to 1.5C or 2C

(based on: CarbonBrief analysis)

The report provides a detailed view of possible futures and potential solutions  based on 1,200 scenarios from the IPCC’s database that were considered suitable to calculate a broad range of future greenhouse gas emissions and global climate outcomes.

In other words, the report doesn’t offer a projection of where we are going but, given where we are and promises made, provides a detailed view of possible futures, with emphasis on those indicating temperature outcomes of below 1.5C and 2C. So, for example, some will involve rapid reductions in fossil fuel use and others rapid reductions in energy demand.

Nearly all scenarios however rely, in differing degrees, on Carbon Dioxide Removal (CDR) either to cater for residual emissions of CO2 and non-CO2 gases (eg Methane) or to reverse interim temperature “overshoots”, say to 1.6C, by anticipating “net-negative” emissions, to bring the average temperature back down to the target by the end of the century.

There are no scenarios where large deployments of CDR avoid the need to substantially reduce emissions over the course of the 21st century, if warming is to be limited below 2C.

Nevertheless the authors caution that CDR “cannot serve as a substitute for deep emissions reductions” pointing out that the role of CO2 removal can at times be over promoted in some scenarios due to insufficient reliance on renewables, such as wind and solar, limited use of demand-side options (reducing the energy we use) and understating the future costs of CDR technologies.

Concerns are also expressed that:

..the prospect of large-scale CDR could…obstruct near-term emission reduction efforts, mask insufficient policy interventions, might lead to an overreliance on technologies that are still in their infancy, could overburden future generations, might evoke new conflicts over equitable burden-sharing, [and] could impact food security, biodiversity or land rights.

Despite these warnings scientists and environmentalists see CDR, and now larger overshoots, to say 1.7C or 1.8C, as just another way for policy makers to kick the can further down the road, rather than take the radical action needed today to both replace fossil fuels with renewables and reduce energy demand.

It is also noticeable that with the IPCC judging that 1.5C is now likely to be reached early in the next decade; statements by policymakers and media are shifting from emphasising a 67% likelihood of staying below 1.5C and “keeping 1.5 alive” to a 50% chance of 1.5C and a 67% chance for 2C. The report indicates that, with current policies, the chance of remaining below 1.5C with little if any overshoot, is now around 33% and some academics are now indicating that 1.5 is no longer achievable.

As an aside, research subsequently published in Nature assessed and plotted all national pledges (promises) currently on the table and surmised that if all came to fruition (action) temperature at the end of the century could be limited to just below 2C. Unfortunately some in the media have painted this in an over optimistic light, ignoring both the poor history of turning pledges into policy, then action and warnings of the threats in a +2C world. Here is a more balanced opinion by Christiana Figueres.

Section C12 of the SPM (page SPM-48) sets out the costs and savings associated with each mitigation option, making the point that no account is taken of the costs of doing no more than is already in place.

It ends with this chart which shows, for each type of mitigation, its potential for reducing emissions by 2030, so the longer the bar the better the result, with the colour gradation indicating the relative costs, blue = saving  and red = the costliest. 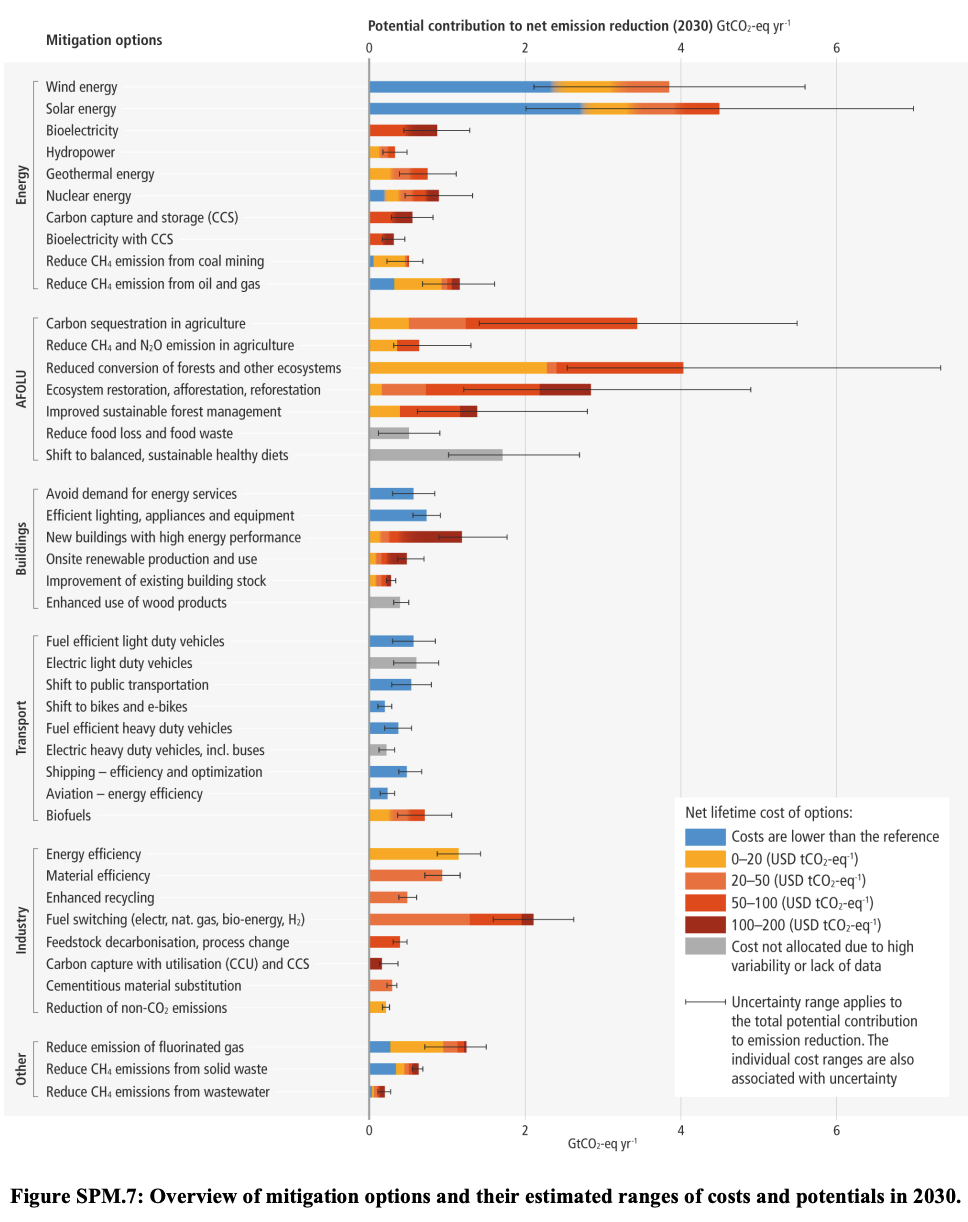 The title of this chapter in the main report belies its importance. This is the first time a WG3 report has contained a section on the realities of demand in terms of what people currently consume and what they need, rather than what suppliers, eg the fossil fuel industry, say drives them to keep supplying more, a given in all the climate models.

The chapter dispels the myth, again favoured by fossil fuel companies, that poorer nations will need to continue to use fossil fuelled energy to improve their wellbeing, before being able to switch to renewables and other forms of mitigation.

The environmental movement has always promoted circular economies of reuse, sharing, more efficient alternatives and the need to stop overconsumption and it’s now official, scientific research not only backs this up but takes it to the wider global economic level best summed up by one of the chapter’s co-lead authors, Prof Joyashree Roy :

Assessment of social science literature from various disciplines helped this report to mention with high confidence that people do not need energy per se but they need a set of services to meet their basic needs such as comfortable homes, mobility and nutrition.

A paradigm shift in the way we think about climate action is reported for the first time in this IPCC report. If people are provided with opportunities to make choices supported by policies, infrastructure and technologies, there is an untapped mitigation potential to bring down global emissions by between 40 and 70% by 2050 compared to baseline scenarios.

The evidence described in the chapter dispels the myth that demand drives supply and economic growth, rather suppliers drive increasing supply, economic growth, overproduction, built in obsolescence and waste (in resources and money). Similarly it highlights that, by using the potential of demand side mitigations, the need for CDR technologies could be minimised.

This is the first time we’ve ever had a chapter on demand because this idea about economic growth and demand being linked was just untouchable. Everybody wants economic growth, so everybody wants demand to increase and that’s it. But as soon as you start questioning it, you realize that it’s a God with clay feet. That you can actually do a lot better with a lot less. There’s nothing preventing us from doing a lot better and using a lot less, including resolving poverty and deprivation around the world.

Recognising the inequitable use of energy, and greenhouse gas emissions of wealthier regions and households, the chapter describes how the global population could be provided with the essential services it needs for decent living standards with half of the energy currently expended.

Not surprisingly, considering the need for international approval, including by vested interests, much of Chapter 5 didn’t make it to the SPM however a few seeds were sown including, in Section B, regional and societal disparities summed up in this extract from B.3.3:

In addition to the chapter 5 download there’s an easier read starting on page 101 of the Technical Summary.

CarbonBrief: Scientists react: What are the key new insights from the WG3?

This site uses Akismet to reduce spam. Learn how your comment data is processed.