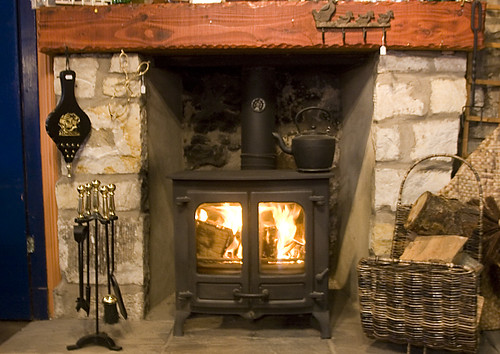 Wood burning stoves are in the news. They make a significant contribution to air pollution according to a recent government report. Wood burners and open fires together account for more than one-third (38%) of the tiny particles known as PM2.5 that are among the most damaging types of emissions for human health. That is more than any other source. Road traffic, by contrast, accounts for only 12%.

I’m not sure what to make of this. I like to fire up our stove on cold days, to supplement the oil-fired central heating, and we are thinking of adding a second stove elsewhere in the house to reduce our reliance on oil. Surely it is better to burn wood than fossil fuels?

Well it’s not that simple. Wood is a renewable energy source as burning it is carbon neutral and doesn’t increase carbon dioxide emissions. But those PM2.5 emissions are a problem, both inside and outside the home. Open fires are worse than burners on that front, but many burners with doors are poor too. A recent study by the University of Sheffield showed that people who open the door to load a stove twice or more in an evening are exposed to pollution spikes two to four times higher than those who refuel once or not at all.

The problem is compounded by burning the wrong type of wood. Emissions from wood treated with chemicals or containing glue are seriously carcinogenic. Wet wood is also more polluting because it produces more smoke. A ban on sales of wet wood for households came into force in England in February.

Biomass boilers tend to be less of a problem than wood burning stoves, especially those that burn wood pellets. They are also more an informed choice than a nice-to-have accessory as you can’t sit around them enjoying the comforting warmth and glow.

I’m happy to take the indoor pollution risk of using a wood burner. But what about the particulates escaping up the chimney? Is air quality in Newton Abbot affected by that? Judging by a pollution map based on the National Atmospheric Emissions Inventory, the answer is yes. Domestic wood burning is the biggest source of air pollution due to PM2.5 in all the local towns.

This surprising fact has to be seen in the context of the huge reduction in air pollution over the past 50 years and the way the government measures it. Annual emissions of PM2.5 have fallen by 80% since 1970, mainly due to the falling use of coal and higher emission standards for transport and industry. The decline has levelled off in recent years though, as decreases in emissions from some sectors are largely offset by increases in emissions from domestic wood burning and use of biofuels by industry.

Wood burning stoves have become fashionable in recent years. They have also become more efficient and less polluting (in terms of outdoor pollution at least). The government’s report assumes stoves in use are mostly of the old polluting type, and that they are being used for 40 hours a week in winter and 20 hours a week in summer. This is based on a 2015 survey that also forms the basis of the NAEI. The government admits its estimates could be wrong by a factor of 10, so wood burning stoves could be making a much smaller (or larger) contribution to air pollution than the 38% attributed.

Whatever the numbers, Gary Fuller, an air pollution scientist at Imperial College and author of ‘The Invisible Killer – the rising global threat of air pollution and how we fight back’, is clear that burning wood, especially as a fashion statement, is not acceptable. In an interview with Environmental Protection Scotland he said even stoves that meet the eco-design standards that will apply from 2022 “emit the same amount of particles as the emissions from six heavy goods vehicles”.

That doesn’t sound like a neighbourly thing to do, even in my semi-rural village. In a city, it is definitely hard to justify when we know that air pollution is a killer. So my search for a clean alternative to burning oil to heat my house is leading in the direction of a heat pump, although that will be more expensive to install and run than another wood burning stove. If I was a more cynical person, I would suspect this demonisation of wood burning stoves to be a campaign aimed at prolonging our reliance on fossil fuels. That’s just mad though, isn’t it?