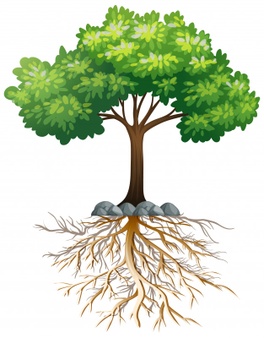 New neighbours move in and immediately cut down a magnificent silver birch and create a drive with non-porous material. I am mad! I love trees, writes Fran Hamilton.

What’s all the fuss about?

Let’s start at the bottom, below the surface of the soil. Maybe you have noticed white threads on old rotting wood. These are called mycorrhizal fungi and absorb nutrients and minerals in the soil and transport them from one plant or tree to another, often over huge areas. In this way they extend the roots of any plant. Nearly all plants (including vegetables) are dependent on mycorrhizal fungi for their thriving and survival. You can read about the astonishing abilities of underground fungal networks in Merlin Sheldrake’s book ‘Entangled Life’.

Still at ground level, trees absorb water and hold it, thus regulating the flow that any heavy rain brings. Once a tree has been removed, soil erosion can result from the removal of the many roots that anchored it in the soil.

Above the ground, the water the trees have absorbed is drawn up and eventually expelled via the branches and leaves. This cools the air, which brings increasing benefits as extreme weather becomes the norm due to climate change. One large oak tree is capable of transpiring 40,000 gallons of water into the atmosphere each year. Strategically planted deciduous trees can cool a building in the hotter months, and then allow the warming sun into our homes during the winter months. Trees can also protect buildings from the wind.

Another key benefit of trees is the reduction in pollutants as a result of the leaves absorbing particles. Researchers from the US Forest Service have calculated that trees in the US remove over 17 million tonnes of air pollution each year, saving at least 850 lives that would otherwise be lost through acute respiratory illness. No doubt the UK will also have a high figure.

Trees are also a vital habitat for wildlife. Tree cavities provide nest and roost sites for birds and bats. In Europe, an estimated 30% of forest-dwelling birds use tree cavities, and it is well known that the availability of cavities – in number and type – is a limiting factor of bird-population size. We quietly acknowledge the lack of tree cavities in our landscape every time we put up a nest or bat-box. The research, however, is starting to suggest that these boxes are not adequate replacements for natural hollows and cavities. Trees have more stable microclimates than boxes, buffering against temperature fluctuations.

Even a dead tree is valuable for wildlife. Springtails, mites, beetles, flies and parasitoid wasps are particularly likely to use dead trees, but it isn’t unusual to find the humble earthworm living metres-high in a tree cavity.

So besides not cutting down a perfectly healthy tree what can we do? Tree cover in Devon is only 11.8%  – slightly less than the national average. Surprisingly, Camden and Croydon feature among the top 20 places in England and Wales with the most tree cover, while largely rural areas like the Lake District and the Yorkshire Dales have the least.

But before rushing out to plant a tree it’s worth doing some research on which tree to plant. You need the right tree in the right place. Getting it wrong can do more harm than good. The Woodland Trust has lots of information on its website, including an A-Z of British trees and a tree ID app, plus tips on how to choose a tree and where to plant it.

Planting trees is often promoted as a way of offsetting our carbon emissions, but such schemes can be little more than greenwash. In many cases the trees would have been planted anyway. Reducing emissions in the first place is always the better option.

So be alert to the sound of the chainsaw; trees are really precious and need all the help we can give them for all our sakes.

Tree planting is fast becoming a national mania as research shows that trees are a key ally in our efforts to reduce carbon emissions.

Planting without due care and attention won’t get us far though. It is all about planting the right tree in the right place for the right reasons. This was a mantra repeated often by speakers at a tree planting seminar held recently by Teignbridge District Council and the Woodland Trust for councillors and community groups.

Dominic Scanlon of Aspect Tree Consultancy illustrated the “right tree in the right place” point by mention of an oak tree someone unknown has planted between two semi-mature trees in Forde Park in Newton Abbot. “It looked like the right place but over the long term we will end up with three poor specimen trees” because there isn’t enough space for all of them, he said. You have to think in terms of decades when planting trees.

TDC commissioned a study last year of the trees it owns. Trees have been considered a burden in the past because of the costs of maintenance, Mr Scanlon said, but they can also be viewed as an asset for their role in carbon capture and storage, and protection from storm water run-off. When considered from that perspective, the benefits far outstrip the costs.

This is the value attributed to TDC’s tree population, as measured using iTree, which calculates the economic worth of trees based on the ecosystem services they provide :

The study also showed Teignbridge has a diverse population of trees with the most common species being oak, ash, sycamore and birch. In terms of pollution capture and carbon storage, the oak is the most important species, followed by beech, ash and sycamore. This is because they are the older, larger trees that confer the most benefits on the ecosystem.

Of course, ash trees are under threat from dieback, caused by a fungus. The disease is expected to kill nearly all of them (94%). Infected trees become brittle and liable to drop branches, which makes them a risk, particularly in public spaces or where they overhang roads. TDC owns 3,800 ash trees and has only removed four to date, but has been planting to replace the trees that will be lost and has almost replaced the full 3,800 already.

Councils need to develop a plan to deal with ash trees they own, said Mr Scanlon. He recommended the Ash Dieback Action Plan Toolkit available from the Tree Council.

Private landowners may also need to take action. Bob Stevenson, tree officer for Devon County Council, said the council estimates there are 448,000 ash trees within falling distance of roads across the county, most of which are on private land.

Heather Elgar of the Woodland Trust said the UK currently has 13% tree cover (10% in England, 15% in Wales, 19% in Scotland and 8% in Northern Ireland), which is significantly lower than for European countries. The Committee on Climate Change, which gives independent advice to the UK government, recommends aiming for tree coverage of 19%. The Trust supports this and considers how to do it in its recently published Emergency Tree Plan for the UK.

Graham Burton, also of the Woodland Trust, took up the theme of right tree, right place but cautioned that it isn’t easy to adhere to that principle. It is about creating a community of trees, a woodland assembly, not just a collection of trees, he said, pointing out there are 24 types of woodland.

The Trust has a preference for natural regeneration over planting but recognises it is not always possible. The drawback to planting is that guards are required and these are often plastic. Biodegradable options are under investigation.

The Trust’s ambitions are to work at landscape scale. For example, it aims to reforest 2% of Cornwall and double canopy cover in Bristol. There is capacity in UK nurseries to produce 100m UK sourced and grown trees, said Mr Burton; the hurdle is finding enough land to plant on. “80% of the UK is farmland, so unless farmers are supported to plant trees under the natural capital banner, it will be really hard to get enough trees planted.”

Teignbridge has a lot of smaller woodlands, he added, and we need to find ways of joining them up. He also gave brief details of the funding and help available for medium scale planting (between 0.5 and 3 hectares) and the free trees available to schools and communities.

Steve Edmunds of the Forestry Commission also gave details of the funding streams for woodland creation and management that local authorities and other landowners can access. These include Countryside Stewardship, targeted at biodiversity and water management, the Woodland Creation Planning Grant, mainly targeted at productive woodlands, and the Woodland Carbon Code, which helps landowners obtain top-up funding for carbon offsetting for businesses.

Then came the reality check. ACT’s Audrey Compton said planting trees is necessary but not sufficient. “Even if we planted every square metre of Teignbridge with trees we still couldn’t make our lives carbon neutral,” she said.

The annual average carbon footprint in the UK is 13 tonnes, including imported goods. We each need four mature trees to offset that footprint. And as long as we keep using soya and palm oil, planting trees won’t help much. Both crops are often planted on land cleared of rainforest. Soya is widely used in animal feed, making it important to avoid buying imported beef and intensively reared meat. Palm oil is used in many food products and toiletries, although labelling doesn’t always make that clear.

Audrey also spoke of the power of hedges to connect nature and reduce flooding. She showed how the hedges in her steep fields grow along contour lines, and said there is evidence there were more hedges in the past. This approach to planting slows down water run-off and soil erosion.

“We need to work with the Environment Agency and local farmers to put hedges in the right places, but these are projects that Parish Councils and local Climate Action Groups can help with,” said Audrey. She highlighted how volunteers this month planted 6,000 trees, including 3,500 as hedgerows, in Ide and Shillingford, two parishes in Teignbridge.

Finally, there was welcome news from Cllr Jackie Hook, portfolio holder for climate change on TDC, who said the council will extend its climate emergency declaration to an ecological one too.

Increasing tree coverage is an essential element in any plan to deal with both of those emergencies, provided we put the right trees in the right place.

Exeter based Treeconomics has done reports on the ecosystem service value of the tree populations in Exeter, Exmouth and Torbay. The Torbay report finds the area’s estimated 818,000 trees store 98,100 tons of carbon and sequester a further 4,279 tons each year.  They also remove 50 tons of pollutants from the atmosphere each year, a service with an estimated value of £281,000, while the structural value of the trees has been calculated at a remarkable £280m.