Thanks to all wardens for the hard work you have put into the scheme during these difficult times. The scheme is constantly growing and moving in the right direction. We have created a subdomain on the ACT website for the Wildlife Warden Scheme. It is still in development, but it already contains lots of useful information:

The picture at the top is my most recent wildlife sighting – a barnacle-looking gall found on bramble. It may not be the most beautiful sighting, but I found it fascinating. I believe they were created by Diastrophus rubi, which is a small parasitoid wasp. A gall can contain up to 200 larvae, each in an individual cell.

We have been finding out a lot about seagrass (eelgrass) habitats. There are two species of seagrass (Zostera noltei and Z.marina), which provide an important habitat for a wide range of species, and help to stabilise the seabed, clean surrounding seawater and absorb vast quantities of CO2.

Unfortunately, seagrass is critically endangered. It is threatened by high nutrient levels (mainly from fertilisers and animal waste), damage from anchors and propellers, disease, and destructive fishing practices. There is anecdotal evidence that seagrass probably existed in the Teign Estuary prior to the 1990s, but it is no longer present. Seagrass in the Exe Estuary has expanded in recent years and can be found near Dawlish Warren, Exmouth and Lympstone. 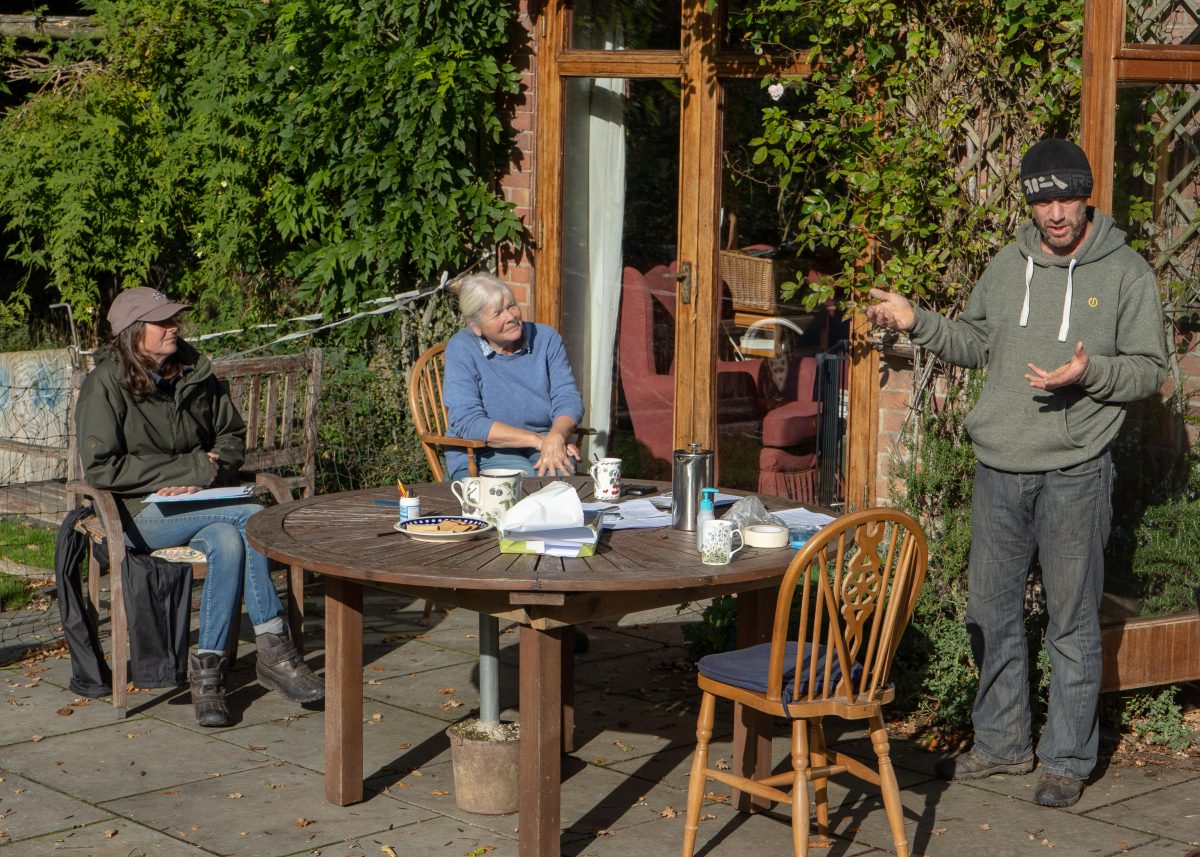 Our Audrey Compton gives a talk about the benefits of local people becoming more actively involved in local conservation to care for wildlife at a Parish level.

In her talk, for Dartmoor National Park, Audrey describes her own journey in discovering and conserving the benefits nature brings to our lives, culminating in the establishment of the Wildlife Warden Scheme.

Watch BBC Spotlight this evening 29 October to see a piece about our new Wildlife Wardens scheme.

Unfortunately other events overtook Spotlight and so the article was not aired that evening but quick thinking Rebekah East was able to post this video on Facebook when it did finally air on 9 November. 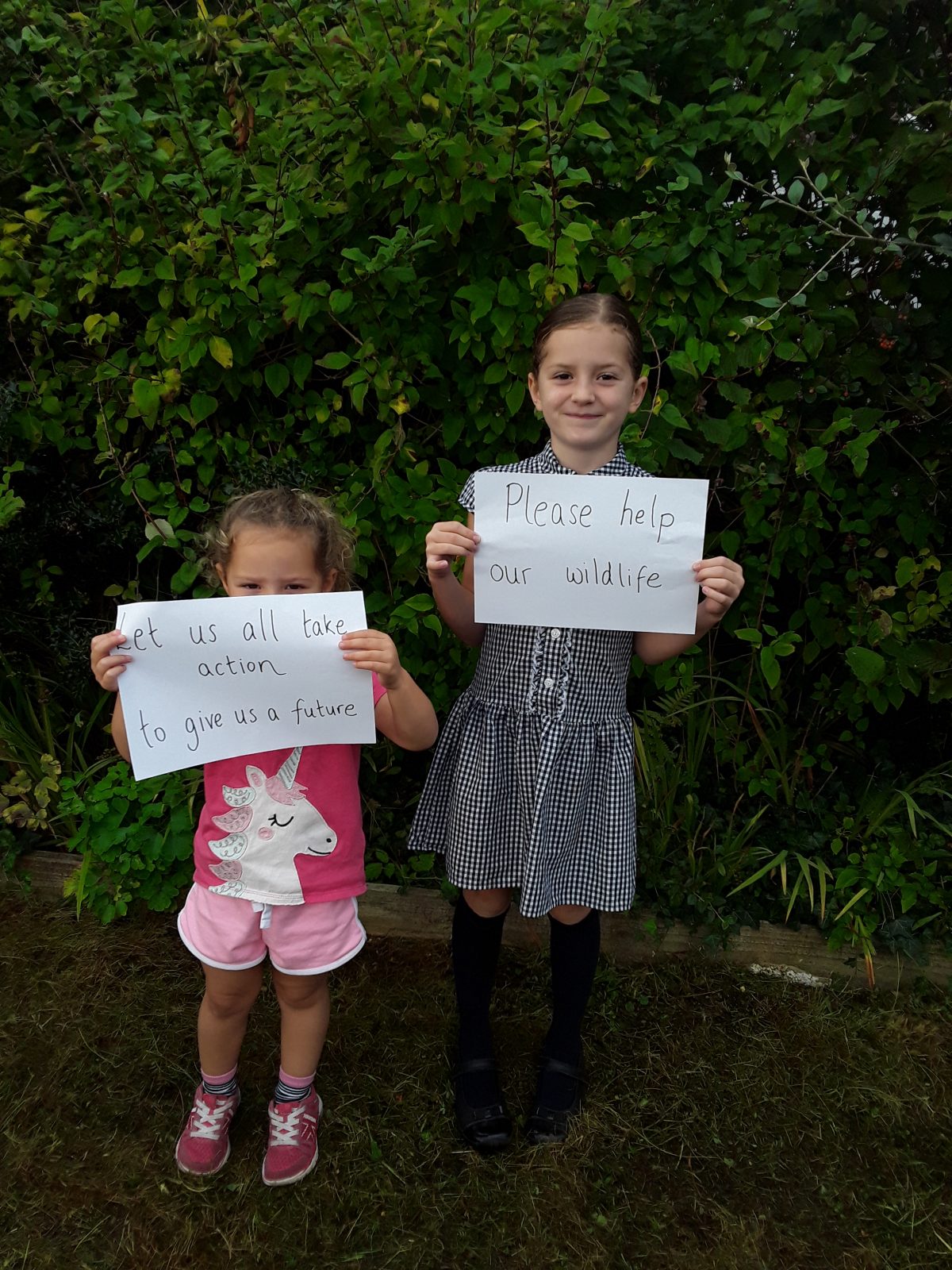 Teignbridge District council are to debate an Ecological Emergency declaration tomorrow Wednesday 30th September 2020 at 10:00am at the Full Council Meeting.

You can watch it live on You Tube at https://www.youtube.com/user/TeignbridgeDC/videos. The video will be posted once the meeting starts.

You can read the full text of the motion here. 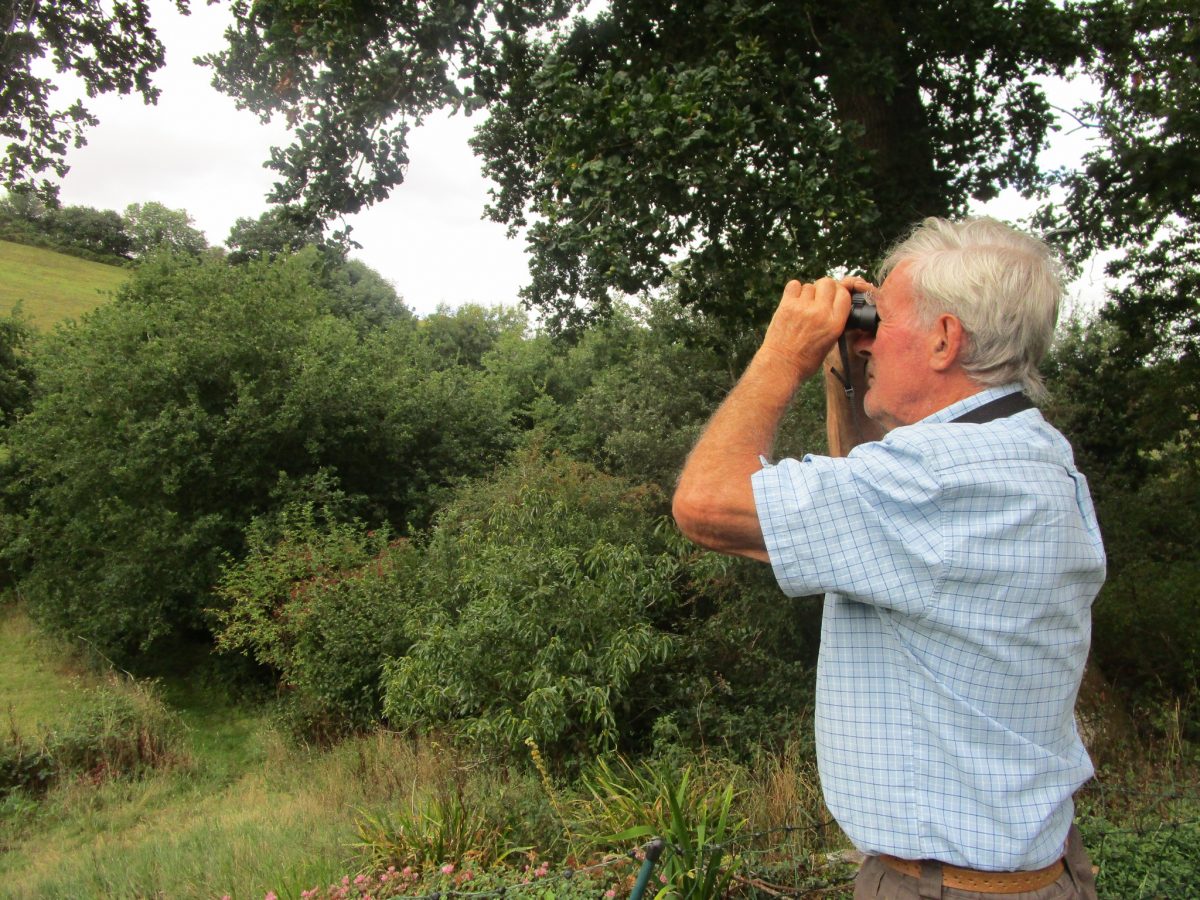 The ACT Ecology Group is looking for parish-based, volunteer Wildlife Wardens, writes Audrey Compton. They are needed to help support, protect and increase our district’s wildlife and improve its chances of surviving the ecological and climate emergencies we face. Wildlife Wardens need to love wildlife but don’t need specialist knowledge, we will provide training.

Having Wildlife Wardens will help our communities become more involved in the natural world, enhancing their physical health and giving them more joy and happiness.

Our aim is for all 54 Teignbridge parishes and Newton Abbot wards to have one or two Wildlife Wardens by the end of 2021. As our training capacity increases, we will recruit up to 5 wardens for each Parish.

Who can be a Wildlife Warden and what will they do?

Anyone who is interested in or knowledgeable about wildlife/ecology can become a Warden. You will:

Wildlife Wardens in neighbouring parishes could work together on joint projects. Wardens with special skills and knowledge might also help train other Wardens.

Unfortunately, we don’t have funds to pay for Wardens’ expenses. However, Wardens who are ACT members will be covered by our insurance.

Some of our existing parish wildlife groups will be Wildlife Wardens, organising work and sharing expertise. If there isn’t a local group, Wildlife Wardens can work together – and maybe even start a group.

Project areas:
A. Surveying and helping to improve and connect habitats.
B. Promoting organic wildlife gardening
C. Monitoring building and development within the parish and alerting ACT of any wildlife damage.

The Ecology Group hopes to provide free training in these areas:

We will stay in close contact with the Council’s Green Spaces Team, and collaborate wherever we can, but we are aware their resources are limited. We have support from Teignbridge District Council, RSPB, the Woodland Trust and Devon Biodiversity Record Centre.

We have been granted funding by Teign Energy Communities, Councillor Jackie Hook’s DCC Locality Fund and Dartmoor National Park Authority, and extend our thanks to them for this vital help. Among other things it has enabled us to appoint a coordinator for a few hours a week, who will ensure good communication and record keeping.

If you are interested in becoming a parish Wildlife Warden, please get in touch with our coordinator, Flavio Winkler Ford: flavio@actionclimateteignbridge.org

Tree planting is fast becoming a national mania as research shows that trees are a key ally in our efforts to reduce carbon emissions.

Planting without due care and attention won’t get us far though. It is all about planting the right tree in the right place for the right reasons. This was a mantra repeated often by speakers at a tree planting seminar held recently by Teignbridge District Council and the Woodland Trust for councillors and community groups.

Dominic Scanlon of Aspect Tree Consultancy illustrated the “right tree in the right place” point by mention of an oak tree someone unknown has planted between two semi-mature trees in Forde Park in Newton Abbot. “It looked like the right place but over the long term we will end up with three poor specimen trees” because there isn’t enough space for all of them, he said. You have to think in terms of decades when planting trees.

TDC commissioned a study last year of the trees it owns. Trees have been considered a burden in the past because of the costs of maintenance, Mr Scanlon said, but they can also be viewed as an asset for their role in carbon capture and storage, and protection from storm water run-off. When considered from that perspective, the benefits far outstrip the costs.

This is the value attributed to TDC’s tree population, as measured using iTree, which calculates the economic worth of trees based on the ecosystem services they provide :

The study also showed Teignbridge has a diverse population of trees with the most common species being oak, ash, sycamore and birch. In terms of pollution capture and carbon storage, the oak is the most important species, followed by beech, ash and sycamore. This is because they are the older, larger trees that confer the most benefits on the ecosystem.

Of course, ash trees are under threat from dieback, caused by a fungus. The disease is expected to kill nearly all of them (94%). Infected trees become brittle and liable to drop branches, which makes them a risk, particularly in public spaces or where they overhang roads. TDC owns 3,800 ash trees and has only removed four to date, but has been planting to replace the trees that will be lost and has almost replaced the full 3,800 already.

Councils need to develop a plan to deal with ash trees they own, said Mr Scanlon. He recommended the Ash Dieback Action Plan Toolkit available from the Tree Council.

Private landowners may also need to take action. Bob Stevenson, tree officer for Devon County Council, said the council estimates there are 448,000 ash trees within falling distance of roads across the county, most of which are on private land.

Heather Elgar of the Woodland Trust said the UK currently has 13% tree cover (10% in England, 15% in Wales, 19% in Scotland and 8% in Northern Ireland), which is significantly lower than for European countries. The Committee on Climate Change, which gives independent advice to the UK government, recommends aiming for tree coverage of 19%. The Trust supports this and considers how to do it in its recently published Emergency Tree Plan for the UK.

Graham Burton, also of the Woodland Trust, took up the theme of right tree, right place but cautioned that it isn’t easy to adhere to that principle. It is about creating a community of trees, a woodland assembly, not just a collection of trees, he said, pointing out there are 24 types of woodland.

The Trust has a preference for natural regeneration over planting but recognises it is not always possible. The drawback to planting is that guards are required and these are often plastic. Biodegradable options are under investigation.

The Trust’s ambitions are to work at landscape scale. For example, it aims to reforest 2% of Cornwall and double canopy cover in Bristol. There is capacity in UK nurseries to produce 100m UK sourced and grown trees, said Mr Burton; the hurdle is finding enough land to plant on. “80% of the UK is farmland, so unless farmers are supported to plant trees under the natural capital banner, it will be really hard to get enough trees planted.”

Teignbridge has a lot of smaller woodlands, he added, and we need to find ways of joining them up. He also gave brief details of the funding and help available for medium scale planting (between 0.5 and 3 hectares) and the free trees available to schools and communities.

Steve Edmunds of the Forestry Commission also gave details of the funding streams for woodland creation and management that local authorities and other landowners can access. These include Countryside Stewardship, targeted at biodiversity and water management, the Woodland Creation Planning Grant, mainly targeted at productive woodlands, and the Woodland Carbon Code, which helps landowners obtain top-up funding for carbon offsetting for businesses.

Then came the reality check. ACT’s Audrey Compton said planting trees is necessary but not sufficient. “Even if we planted every square metre of Teignbridge with trees we still couldn’t make our lives carbon neutral,” she said.

The annual average carbon footprint in the UK is 13 tonnes, including imported goods. We each need four mature trees to offset that footprint. And as long as we keep using soya and palm oil, planting trees won’t help much. Both crops are often planted on land cleared of rainforest. Soya is widely used in animal feed, making it important to avoid buying imported beef and intensively reared meat. Palm oil is used in many food products and toiletries, although labelling doesn’t always make that clear.

Audrey also spoke of the power of hedges to connect nature and reduce flooding. She showed how the hedges in her steep fields grow along contour lines, and said there is evidence there were more hedges in the past. This approach to planting slows down water run-off and soil erosion.

“We need to work with the Environment Agency and local farmers to put hedges in the right places, but these are projects that Parish Councils and local Climate Action Groups can help with,” said Audrey. She highlighted how volunteers this month planted 6,000 trees, including 3,500 as hedgerows, in Ide and Shillingford, two parishes in Teignbridge.

Finally, there was welcome news from Cllr Jackie Hook, portfolio holder for climate change on TDC, who said the council will extend its climate emergency declaration to an ecological one too.

Increasing tree coverage is an essential element in any plan to deal with both of those emergencies, provided we put the right trees in the right place.

Exeter based Treeconomics has done reports on the ecosystem service value of the tree populations in Exeter, Exmouth and Torbay. The Torbay report finds the area’s estimated 818,000 trees store 98,100 tons of carbon and sequester a further 4,279 tons each year.  They also remove 50 tons of pollutants from the atmosphere each year, a service with an estimated value of £281,000, while the structural value of the trees has been calculated at a remarkable £280m.