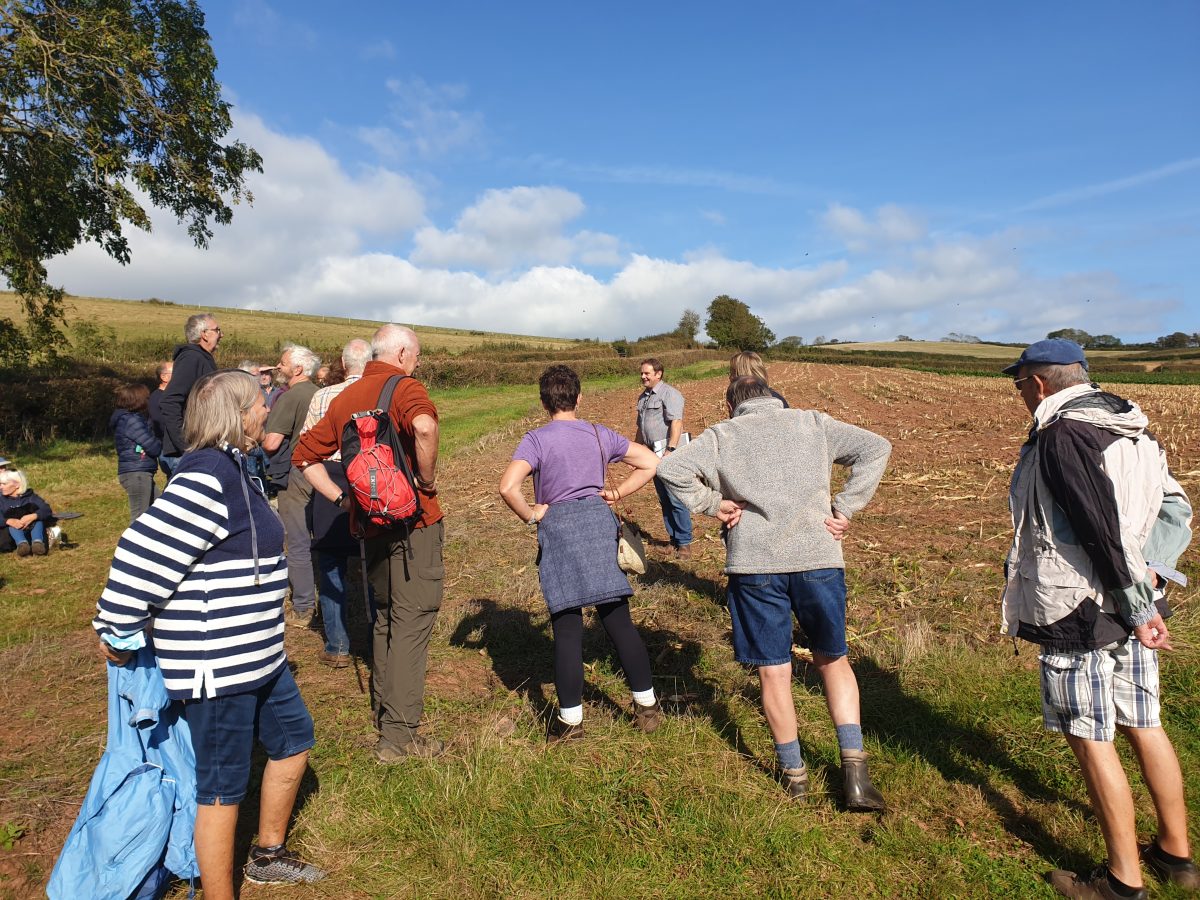 Peter French threw open his farm to a group of nearly 40 visitors last week (12th October) to share his ideas on how local farmers can adapt to the changing conditions they face. Peter farms 280 hectares (700 acres) near Stokenteignhead and is working to reduce his farm’s carbon footprint. He is doing this by becoming more self-sufficient and by designing farm systems that work together to improve productivity, profitability and soil health.

One big change Peter has made is to switch from running a farm with few livestock to regenerative farming, whereby cattle, sheep, pigs and chickens all help to enrich the soil and raise its organic (and thus its carbon) content. He also grows wheat, barley, oats, oilseed rape, fodder beet and maize.

Peter is also keen to capitalise on the growing demand for locally-grown food. He rents some of his land to a local grower who sells vegetables from his small farm shop. Peter feels there could be a future for them both in a bigger, better-sited farm shop, which would serve the nearby communities in Teignmouth, Newton Abbot and Torbay. Already some of his meat and eggs are sold from the farm, as well as supplying a café in Teignmouth, which he and his wife own.

Farmers are coming under increasing pressure to reduce their impact on the environment. Land use, including agriculture, forestry and peatland, accounts for 12% of total UK greenhouse gas emissions. Those emissions need to come down substantially if the UK is to meet its climate targets. To help achieve this, the agricultural support system is being completely overhauled. The Basic Payment Scheme, which pays a standard amount per acre of land, is being phased out. Its replacement, the Environmental Land Management Scheme (ELMS), will be rolled out from 2024. This will provide public money for public goods, such as better air and water quality, thriving wildlife, soil health, or measures to reduce flooding and tackle the effects of climate change.

Peter French is ahead of the game here. For many years he has worked closely with the RSPB, which owns the land he rents at Labrador Bay, to obtain government grants to finance the numerous ways he helps wildlife on his farm. This year he has applied for a Countryside Stewardship grant, which will eventually be replaced by the ELMS. The government is encouraging farmers to apply for this grant, saying that by entering an agreement now, they will be well placed to benefit from the ELMS when it comes into operation.

The RSPB land at Labrador Bay is run as a habitat for Cirl Buntings. When Peter first took over Deane Farm from his father, UK Cirl Bunting numbers were down to extinction levels at about 100 pairs, all of them in South Devon, and with the most important nucleus at Labrador Bay. Now, 28 years later, thanks to the work of farmers like Peter, there are more than 1,000 pairs,  and their geographic area is spreading.

You can see Peter enjoys the challenge of finding new and circular ways to make his farm more sustainable. Having livestock on the farm adds fertility, which is further boosted by break crops such as herbal leys (grass plus several deep-rooted herbs that can extract usually inaccessible minerals). The herbal leys can reduce livestock worm burdens, and by doing so, reduce the use of wormers that can kill dung beetles and many other beneficial soil invertebrates.

On some of his land, Peter grows cereals for seed corn, which command a good price premium but demand more fertilisers and herbicides. Peter worries about the effect of these treatments on long-term soil health and is always looking for ways to improve it. He is concerned about the environmental dangers of using ammonium nitrate and the nitrous oxide it releases, which accelerates climate change. However, he is wary of using sewage sludge because of the high levels of heavy metals, and equally wary of composted domestic green waste, which contains low levels of plastic. He feels famers need to be more tolerant of weeds in their crops, which aren’t a problem when rolled and fed to livestock.

Another change of practice is to use a ‘minimum tillage’ cultivator to plant a new crop, rather than a plough. This digs less deep, causing less damage to the soil and releasing less carbon. Peter is also considering planting more hedges to reduce soil erosion from heavy rain on his sloping fields, if grant payments adequately cover the costs. Hedges can hold the soil and slow the run-off if well placed.

Peter is on a journey towards a more carbon-friendly way of farming and is keen to share what he has learned, even to the extent of giving up a day’s work to welcome a mixed group of farmers and wildlife enthusiasts to his farm. It was much appreciated.

The event was funded by Devon County Council and Teignbridge District Council Councillors. It was run by the RSPB and ACTion on Climate in Teignbridge, and is one of a series being run for farmers by ACT’s Food, Farming, Forestry and Fisheries Group.